Kitchens of India is so much more than just a delicious meal. It entices your taste buds on a mystical voyage through the legacy of authentic Indian gourmet cuisine. Kitchens of India products encompass ancient recipes of India safeguarded and passed down from generation to generation by royal cooks of the Maharajas, capturing the elements

Kitchens of India is so much more than just a delicious meal. It entices your taste buds on a mystical voyage through the legacy of authentic Indian gourmet cuisine. Kitchens of India products encompass ancient recipes of India safeguarded and passed down from generation to generation by royal cooks of the Maharajas, capturing the elements of a time when every meal was treated as a grand celebration. With Kitchens of India, the traditional culinary lineage of Indian food has been further perfected by Master Chefs of India`s prestigious ITC hotels – with passion and an eye for detail to deliver nothing short of an enchanting experience. But that`s not all. Our delectable treats are crafted with 100% natural ingredients and are completely preservative free. The age old cooking techniques used by our Master Chefs add a unique taste that captures the essence of a meal that is nothing short of a royal Indian treat.

Kitchens of India (KOI) brings the diverse culinary heritage of India to the world by creating the forgotten delicacies of a bygone era, when maharajas ruled the land and cooking was an art perfected by few. KOI has even been to the highest peak in the world!

Young mountaineer, Gaurav Sharma, took KOI to new heights as he scaled Mount Everest. He relished the Ready-To-Eat Dinners during his 4 month expedition— a testament to the convenience and taste of this remarkable brand. Offering a full range, the products are 100% natural, authentic Indian, Vegetarian, Kosher, competitively priced and easy to prepare. But the KOI story goes even further than that.

Envisioning a larger societal purpose has always been a hallmark of ITC, the makers of Kitchens of India, embodying “a commitment beyond the market”. This is reflected in not only the products themselves, but in the company’s extensive efforts in enhancing the Triple Bottom Line: Economic, Social and Environmental capital. President Barack Obama and The First Lady recently visited India. They stayed at Maurya, ITC’s premier hotel and ate at ITC restaurants Bukharaand Dum Pukht. A feast was created by the master chefs of the hotels – the same culinary wizards that created the exquisite range of KOI products.

Bukhara has been declared the best Indian restaurant in the world by “The Restaurant Magazine”, UK. In addition to experiencing the amazing hotel and food, President Obama was able to see first-hand the sustainability efforts of ITC through one of its key initiatives, e-Choupal. Recognizing the need to reserve and enrich precious environmental resources, e-Choupal leverages the internet to empower small farmers by enabling them with resources they would not have access to otherwise. With over 6,500 internet stalls, e-Choupal services today reach over 4 million farmers growing crops in over 40,000 villages! Previously, Hilary Clinton visited India and actually used one of the ITC/KOI LEED offices to announce a vision for Indo-US collaboration on climate change. ITC’s Green Centre in Delhi is the world’s largest building to be awarded the LEED platinum rating! Energy consumption was slashed by 51% and water consumption dropped by 40%! ITC’s commitment to quality, authenticity, the environment and its people is unmatched by any other company in the country. The company is the only company in the world to be Carbon Positive, Water Positive and Solid Waste Positive.

It’s no wonder Kitchens of India is one of the fastest growing Indian brands in America!

The desire to bring this delectable fare to the rest of the world has given birth to the venture called ‘Kitchens of India’. With same Master Chefs, same Indian recipes, same cooking methods and the same great Indian taste, authentic delicacies from ITC ‘s Gourmet restaurants is now available in ‘imported 4 layer retort keep fresh’ pouches. These Indian dishes trace their origin to a bygone era when Maharajas ruled the land and cooking was an art form perfected by few.

Kitchens of India Ready-to-eat dishes are a selection of authentic Indian recipes from ITC’s gourmet restaurants, specially re-created with deliberation and love by the Master Chefs. Each recipe has been handed down from one generation of Master Chefs to another. The range of Indian recipes on the offer spans the entire terrain from the far flung regions of the north-west frontiers to the coastal regions of the south.

With ITC’s Kitchens Of India Ready-to-eat products, nothing has changed, except where you eat. Completely free of preservatives and absolutely delicious, there’s no better way to discover Indian food.

The origin of Indian spices dates back thousands of years. From time immemorial, spices have played an important role in Indian cooking, imparting amazing flavours to elaborate/extensive Indian savouries. 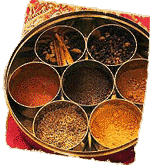 They are amazing 6 different flavors for this price I buy these ALL the time. They are amazing 6 different flavors for this price! And it is from professional chefs. I like that it is kosher and it is vegetarian. I also like that it is possible to boil it in the pouch so I don’t have to clean the pan. The rest of my family likes to take it out of the pouch and heat it in the pan. Luckily both are valid options and it is just delicious and a joy to eat. It tastes just like it would from any restaurant and at a fraction of the price. I would very…

My Favorite Lunch Box Item I take this for lunch at work about twice a week. Even after several years, I never tire of it — that’s how delicious I find it. Heating it in the microwave is even better, but not mandatory; I like it either way.. It also makes good camping food. Nutritionally, it’s calorie-dense with real food ingredients, which I like. Most people will probably want a pile of rice with this, but for a M-F lunch, I pair it with a couple of fresh fruits and call it a happy meal.

The owner of this website is a participant in the Amazon Services LLC Associates Program, an affiliate advertising program designed to provide a means for sites to earn advertising fees by advertising and linking to Amazon properties including, but not limited to, amazon.com, endless.com, myhabit.com, smallparts.com, or amazonwireless.com.